WE ARE OPEN at BOTH locations and continuing to provide the best care to our patients. We are still offering Telemedicine appointments as well. Please call us at 901-333-2525 to schedule 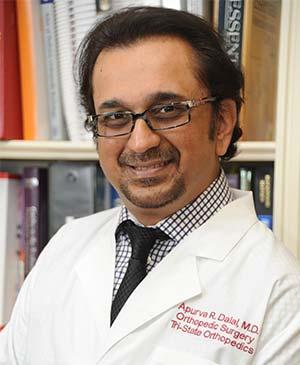 Dr. Apurva Dalal is a Board Certified Orthopedic Surgeon. He received his Orthopedic Surgery training from Albert Einstein School of Medicine, NY. After completing two years of General Surgery and four years of Orthopedics Surgery training he pursued to do a fellowship in Total Joint Replacement and Sports Surgery. This was completed at Center for Hip and Knee Surgery, Mooresville, Indiana. Dr. Dalal directly worked with Dr. Merrill Ritter who was president of American Hip society.

In the early nineties, Dr. Dalal received training at prestigious Brigham and Women’s Hospital/ Harvard Medical school in Boston. He worked with pioneers of Joint Replacement Surgery like Dr. Clement Sledge and Dr. Thomas Thornhill. He has been a physician since 1987 and has more than 30 years of experience as a Medical Doctor.  He was one of the youngest physicians at age of 24.

Dr. Dalal came to Midsouth region in the year 2000 and have been helping patients of this area since then. He has his private practice at two different locations.

He is an active fellow of American Academy of Orthopedic Surgery and Tennessee Orthopedic Association.

He is was the first surgeon who recognized the importance of Robotics in Joint Replacement Surgery at Mid South. He was instrumental in bringing Mako Robot to St Francis Hospital in 2011. Since then he has done over 700 knee replacements and 300 hip replacements using Mako Robot. He is the most experienced Robotic Surgeon in Midsouth area. He pioneered the technique and now the whole state has adopted the use of Makoplasty for Joint Replacement Surgery!

Dr. Dalal is highly experienced in partial knee replacement and in patellofemoral Joint replacement surgery using Mako Robot. He believes in philosophy. "If ain’t broken don’t fix it." That’s why he started selectively replacing the only bad portion of knee rather than doing the full knee replacement in certain patients.

Dr. Dalal has full Staff privileges at all Methodist Hospitals, St Francis Hospitals, and Baptist Surgery Centers. He has an active medical license in Tennessee and Mississippi.

He lives in Memphis TN for last 15 years and has been married for over 25 years. His wife is also a physician and works with him. They have one son who loves to listen to music and photography!